Rise of the Robots: Review and Reflection

I recently read Martin Ford’s Rise of the Robots with the UMD CS faculty book club. The book considers the impact of the growth of information technology (IT) on the human labor market, and how the trend towards greater automation could eventually eliminate a substantial number of jobs. The result could be a radical, and disruptive, reshaping of the global economy.

I would recommend the book. I found it well-written and thought provoking. Ford capably argues from past economic and technology trends and also digs into particular problems, products, and research in order to extrapolate future impact. Of the ten faculty who discussed the book, nine of us (including me) were convinced that future automation will be increasingly disruptive to human labor markets.

While reading the book, I found myself wondering about my own role, and that of my field, in addressing this situation we’ve contributed to. Many computer scientists have high-minded ideals and wish to help society through IT innovation. What can we do to ensure that those ideals are realized, rather than perverted into the dystopian future that Ford is warning us about?

The Rise of the Robots considers how automation is increasingly replacing human labor, and speculates about the long term impact of such replacement. One 2013 analysis quoted in the book suggests that 47 percent of current American jobs are at high risk of being automated within the next 20 years. The book provides its own specific, suggestive examples. One is a robot that can perform all of the tasks needed to construct a high-quality hamburger. This is a task with a clear specification that can be realized in a carefully controlled environment; another example is robot-based automotive manufacturing. As artificial perception and dexterity improve, the need for careful choreographing will diminish and the low-skilled tasks that only humans can do now will be automated, too, e.g., restocking boxes or constructing parts of houses (both mentioned in the book). Google’s (actually Boston Dynamics’) Atlas “robo human” is impressively capable.

As artificial cognition improves, jobs involving analysis and management will also be increasingly automated. A contemporary example is financial analysis. Dan Nadler, the inventor of Kensho, a “computational analysis engine for the financial industry” now in use by top banks, was recently interviewed by the NYT: “Within a decade, he said, between a third and a half of the current employees in finance will lose their jobs to Kensho and other automation software.” Even today, most market trades—between 50 and 70%—are driven by algorithms, not people. This is how companies like Jane Street Capital can be so profitable with so few workers. An article in the NYT stated that “Jane Street, which is privately held, has increased its shareholder’s equity, or net worth, to more than $1 billion today from $228 million in 2007. … Moreover, it supports just 450 people in offices in New York, London and Hong Kong.” The book states that over the last 15 years, 50,000 Wall Street jobs have been lost—a 33% decline—even as overall revenue and profits are up.

The book points to the future possibility of someone “doing everything right” in terms of getting a college degree and good grades, but still not being able to find a meaningful job. Even now, a recent report from the Economic Policy Institute says that higher unemployment and underemployment for college graduates “stems from weak demand for goods and services, which makes it unnecessary for employers to significantly ramp up hiring.”

The impact of increased automation

One view of how this plays out is that as some industries succumb to automation, other industries will emerge to offer new jobs that replace the lost ones. As support for this view, the book considers the agricultural industry. At the turn of the century, about 40% of the workforce was involved in agriculture. Today it is about 2%. As agriculture was increasingly carried out by machines, people moved to different sectors, with the service sector being the dominant today. 1 During our book club discussion, one person referred to predictions of job growth from the Bureau of Labor Statistics, which point to increasing employment in the health care industry, food preparation, and some areas of business and technology, as evidence that declines in other areas are being counteracted.

As machines do more of the work, humans must find jobs that machines cannot do as well. But as robots and automation become even more capable, fewer opportunities for humans will remain. And a problem arises when these new jobs are less stable and pay less than the jobs they replace. Such a trend has been playing out since the mid-1970s as shown in a compelling graphic due to Robert Reich in the NYT. Here is a snapshot of one part of it: 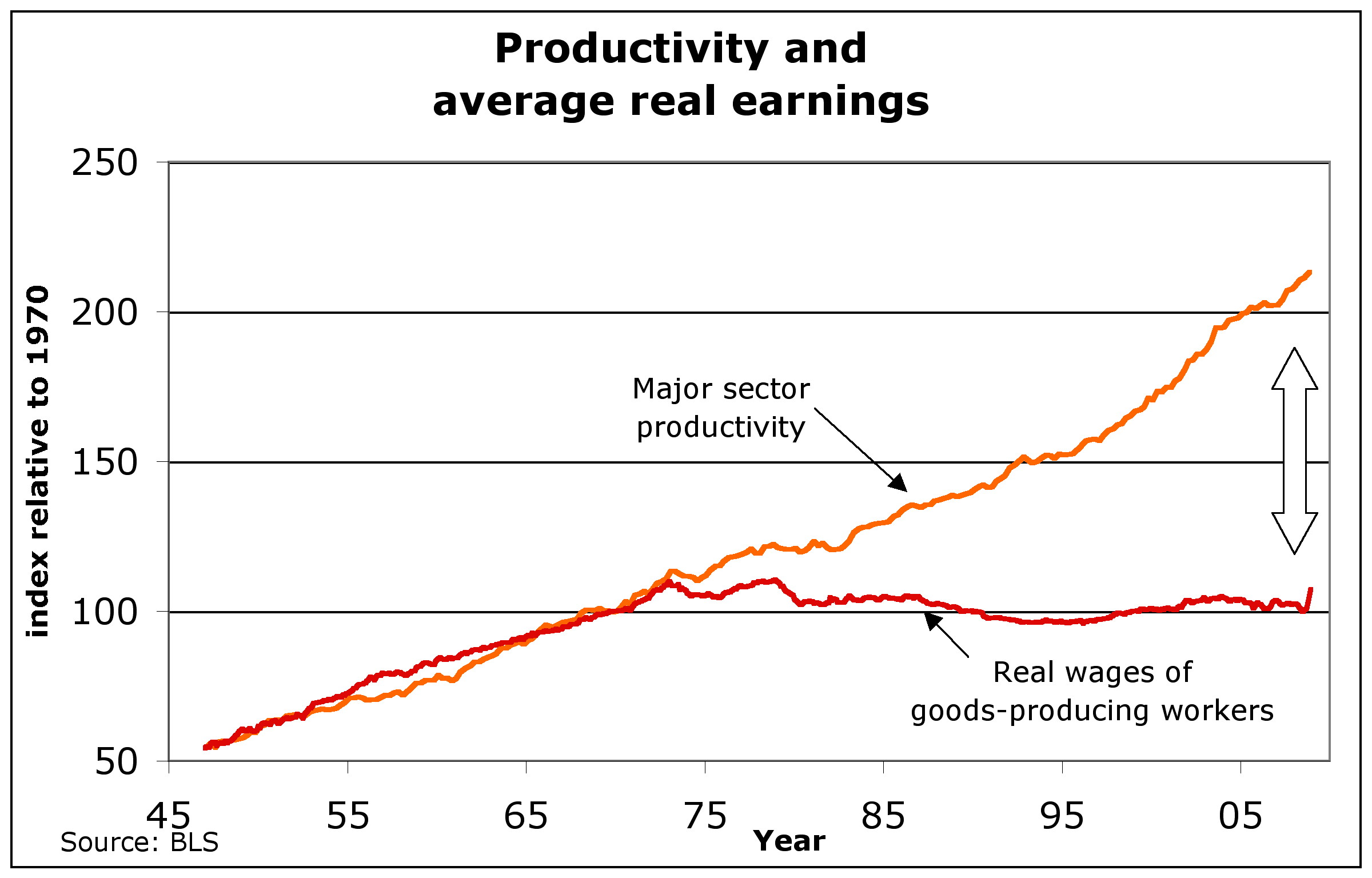 While automation tends to make the production of goods cheaper, it relies on the assumption that more people will buy them, raising profits. In the mid-20th century when this happened, the profits trickled down to the workers whose productivity was responsible for reducing costs. These workers then bought more goods, creating a virtuous cycle.

However, this cycle is broken by IT: When machines do things instead of humans, the productivity gains need not be passed back to workers as higher wages. The rising tide does not lift all boats. Rather, the tide lifts the capital owners, who make more profits. Eventually no cheapening of goods will be sufficient—enough of the population will be sufficiently poor that they will be unable to buy the goods to keep things afloat. Ultimately, perhaps well into a period of significant human suffering, the whole system will collapse.

Not everyone agrees with this analysis, or agrees that automation is a significant cause of income inequality; e.g., trade policy is an oft-cited source (and surely a contributor). Robert J. Gordon’s book, The Rise and Fall of American Growth, was raised during the book club discussion as a thoughtful criticism of Ford’s point of view.

The future dominance of automation raises many challenging questions. The most obvious question is: What can we do to prevent the large-scale suffering that could result from a radical shakeup of the labor market? Answering this question requires answering a more philosophical question: What is the value of the human being as such? Is every human being valuable or is a human being valuable only in reference to their production value, brain power, etc.? Robots are steadily doing everything better than humans at the level of production. How society responds to this reality will reveal how it values (all) human beings.

One response might be to attempt to hold back technological progress, protesting today’s automation just as the Luddites protested textile automation in the late eighteenth and early nineteenth centuries. But on reflection this approach doesn’t make sense. The problem is not automation itself; to the contrary it has brought, and can continue to bring, tremendous benefits to humanity at low cost. The problem is rather how the treatment of automation as labor-replacing capital increases relative poverty and creates ever greater income inequality. The solution to this problem is social/political, not technical.

On the other hand, it is worth asking: What jobs (or what human work) is fundamentally irreplaceable? What is the role of humans in an automated world? Again there is an important philosophical question here. Can a robot actually be a better mother than a human mother? Is there an irreplaceable value to a human teacher, present in the classroom in the flesh? Is there a value to a nurse and physical human touch? It may be that we will choose not to employ automation in some cases even if such automation could be developed. Or we will deploy it and later realize that doing so produced worse outcomes.

The main idea suggested by the book to deal with dwindling jobs is to find a way to make gains derived from automation benefit everyone, not just capital owners. An idea proposed by Friedrich Hayek in the 1970s is one possible solution: Give all citizens a no-strings-attached stipend, or basic income. 2

This approach might retain the efficiency and innovation benefits of a market-based system (since people choose how to spend their stipends) while cushioning individuals from the loss of wage-paying work. Supporting a basic income might be politically difficult, however, as it runs contrary to current ideals about work—this is where a philosophy about human worth apart from work is critical. Basic income has received recent support from Silicon Valley and some scientific studies and it is set to be attempted in the Netherlands and possibly Switzerland. Andrew Flowers has written a comprehensive piece on the idea.

What can we do, as technologists?

As I read the book I wondered about my own role in the rise of the robots. After all, as a computer science professor I am teaching students about software-based automation—how to use it, understand it, and program it. Just as someone concerned about global warming might buy solar panels or an electric car, I wondered what I could do to combat the ill effects of increasing automation.

There are (at least) two things I think technologists can do in response to the rise of the robots. First, they can recognize that their work is upending the traditional economic model, and they can think about how to respond to the suffering of those whose labor is being obviated. As I said above, I don’t think this means we should stop developing new technology, but we should think about ways to ensure that technology is used for the greatest good. At Universities, I could imagine developing seminar series and discussion groups to work through possible ideas. 3

Second, technologists can get the word out, so that other people will start thinking about solutions, too. Technologists are obviously among the most qualified to speak about trajectories involving automation, and so the rest of society needs to hear it from them.

Apparently, Kensho’s Dan Nadler does both of these things. Quoting the above-linked NYT article:

Some … have told Nadler that he would be wise to stop talking about the potential job losses at the same banks he is trying to secure as customers. Nadler has told them that he needs to carry on, partly to maintain his intellectual integrity. He often connects his discussion of jobs to his political fund-raising on behalf of candidates who call for a more robust social-safety net.

Maybe if we can accept that the robots are rising and work towards structures that share the benefits of automation equitably, we humans can end up like those aboard the Axiom in Wall-E.

When robots do it all, from Wall-E

Or if that particular lazy lifestyle seems unpalatable, we can use the benefits of automation to take advantage of our freedom in a whatever way makes sense to each of us!

Thanks to Boniface Hicks for helpful comments on drafts of this article and suggestions for reflection, and for the UMD CS faculty book club for interesting discussions.

10 Responses to Rise of the Robots: Review and Reflection